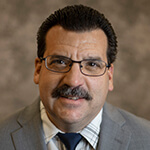 Dan has over 40 years in the industry. His career began in 1980 as an apprentice plumber and pipe fitter. He joined S.A. Comunale in 1998 as an estimator/project manager, and because of his consistent leadership was promoted to Executive Vice President, Mechanical Division in February 2018.

His projects include a $10 million, higher education high-rise dorm HVAC retrofit completed in 84 days; a $9 million chemical plant rebuild due to an explosion completed in 4 months; and a more than $40 million, 2-year-long HVAC and plumbing project for a healthcare facility bed tower.

Dan earned the Apprentice of the Year honor in 1983. He holds HVAC, hydronics, and refrigeration licenses in Ohio.

He has served as past president of the Akron Chapter of the Mechanical Contractors Association of Ohio (MCA), and was on the joint apprenticeship committee for 15 years. He holds numerous certifications for advanced industry training.

Dan enjoys spending his time with family and friends, completing personal construction projects, and spending time outdoors. He is a fervent fundraiser and supporter of the Stephen A. Comunale, Jr. Cancer Foundation.